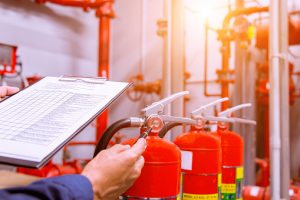 Firefighters responded to over 1.3 million fires that caused $23 billion in property damage in the United States in 2017, and in some cases the causes in workplaces were hiding in plain sight.

Among easily correctable workplace fire hazards that may be plainly visible were clutter, faulty fire extinguishers and sprinklers, and electrical hazards.

The National Fire Protection Association, a self-funded, nonprofit organization, said that in 2017 fire departments responded to 1,319,500 fires, a decrease of 2 percent from the previous year.

An estimated $23 billion in property damage occurred as a result of fire in 2017, including damage from Northern California wildfires.

U.S. fire departments respond to about 13 calls from businesses every hour. These blazes kill over 3,000 people and cause over $13 billion in property damage a year.

Here are easy checks that businesses can perform of workplace fire hazards in the workplace:

Dust, shavings, waste and all-around clutter can increase fire risks and hide other hazards. Providing recycling and waste collection containers, conveniently located, can facilitate regular removal of unneeded items in the workplace. Providing supplies for employees to keep their work areas clean and allow time per shift for such cleanups.

Dry chemical extinguishers are most commonly used in workplaces, but they won't work on all types of fires. For example, they aren't designed for fighting fires involving metals. In some workplaces, the choice should be a carbon dioxide extinguisher.

Electrical distribution and lighting issues are the leading cause of fires in industrial properties.

Be smart about using a workplace's storage space. It might be tempting to stack on a top shelf but remember that sprinkler systems need at least 18 inches of clearance to work right.

Many businesses have some hazardous chemicals on site. Knowing the properties of each chemical is key in keeping employees safe and in knowing how to store, handle and use the chemicals correctly can avoid unsafe conditions. Officials in charge of workplaces should become familiar with which chemicals are incompatible with each other.

Fire codes require emergency exit paths to remain clear at all times. Large shipments, construction, demolition and temporary needs don't negate this requirement. If an emergency exit needs to be blocked for any reason, alternate routes must be established before blocking the route.

Welding, cutting, brazing and other "hot work" are sometimes taken for granted, especially when they aren't part of normal operations. To keep flammable vapors in check, ensure that such areas have proper ventilation and chemical and waste management and that periodic inspections of equipment are done.

Contact O'Malley & Langan Law Offices today for issues about workplace fire hazards that may be in plain sight.