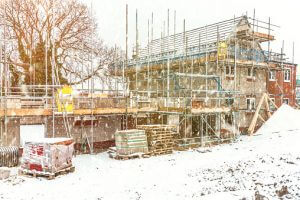 The weather has been downright freezing already this year in Scranton, Lackawanna, Luzerne, Bradford, Schuykill, Lehigh, Monroe and surrounding areas. The cold winter weather can be bad news for workers. A workers' compensation lawyer knows that many employees have jobs in professions that require them to be outside, even in the bitter cold. Precautions must be taken to protect these workers and ensure they don't get injured or lose their lives due to exposure to extreme temperatures. Winter in Pennsylvania is a time when workers are at risk of slipping and falling because of dangerous conditions.  If you slip and fall on an accumulation of snow or ice while working, you may have a third party lawsuit in addition to your entitlement to workers' compensation benefits. A "third party" refers to an individual or business other than your employer.

Safety News Alert recently published an ironic story about a news station whose reporters learned firsthand about the dangers of outdoor work. An affiliate of KRDO was sent to talk to a sanitation worker and to talk to a sign installer about the risks of working outside in frigid temperatures.  The workers talked about their jobs and about the safety precautions taken to prevent frostbite.

One of KRDO's own reporters really should have been listening. The reporter was onsite on a freezing day in early January to film a late news liveshot. He was without a video photographer, which has become more common as cameras have gotten smaller. He was trying to set up the tripod, equipment and camera to do his shot, but he couldn't get it set up correctly without taking his gloves off.

He did remove his gloves, exposing his hands to bitter cold weather on a night when the temperature was just 11 degrees. The result: severe frostbite that led to hospitalization. He luckily did not lose any fingers, and he was expected to recover. The news station is under fire for a lack of safety training for its own employees about winter weather.

Safety BLR has some some tips to help others workers stay safe and avoid injuries that could lead to hospitalization or even death. It is important for workers to:

These are just a few of the key things that workers should do this cold season to try to avoid injury. Employers need to make sure workers are properly trained and provided with an appropriate work environment to stay safe from inclement weather.