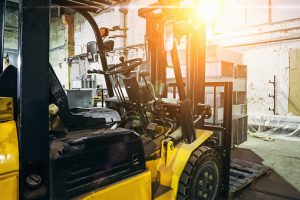 A jury has awarded $15 million to a worker whose foot was crushed by a forklift being driven by an unlicensed forklift operator. The $15 million award included $3 million in punitive damages, in addition to $12.2 million in punitive damages.  The worker reportedly sustained injuries leading to the lawsuit when he was performing work taking down the 2012 International Manufacturing Technology Show.

The worker's injuries were sustained in the course of his job, and job-related injuries normally lead to workers' compensation claims and not personal injury cases. In this particular instance, however, the injured man was able to file a lawsuit against a third party non-employer.

When it is possible to file third party lawsuits, the litigation can lead to broader recovery than would be available if only a workers' compensation claim were made. Employees injured on-the-job should explore possible options for pursuing a lawsuit against a third party in order to maximize recovery for losses and damages.

Workers' comp benefits protect workers even in cases where employers aren't negligent, because workers can make a benefits claim for any workplace injury.  However, employers are also protected too because workers' compensation is an exclusive remedy system under Pennsylvania law. When a worker is injured on-the-job, the employer can't be sued by the employee except in very limited circumstances like when there is intentional wrongdoing involved. Employers don't need to worry about million dollar damage awards or punitive damages.

Employees, however, can't always get 100 percent full compensation for economic and non-financial loss.  In the case of the man whose foot was amputated, for example, Safety News Alert reports his impairment was expected to cost him his job at the National Guard and it had also resulted in significant pain as doctors first tried to save the foot and then needed to use a skin graft from his thigh after the amputation when they failed to do so.

In this particular case, Global Experience Specialists (GES) had set up the show and it was held responsible by the jury for the amputated foot because it had a forklift being operated by someone without proper licensing and training, and because it did not have a spotter present who could have prevented the accident from happening. The company had tried to argue that the injured man was partially responsible for the incident, but the jury found the company was to blame and was responsible for compensating the injured man.

Victims hurt at work can often make a workers' comp claim and pursue a personal injury case in order to maximize the chances of receiving full compensation.  This is a smart choice in cases where negligence of non-employers caused or contributed to on-the-job injuries.