Home > Blog > Can a Scranton Worker Get Compensated for an Injury Due to Goofing Around on the Job?

Can a Scranton Worker Get Compensated for an Injury Due to Goofing Around on the Job? 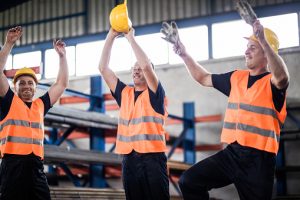 Whether a horseplay defense is going to be successful to justify a workers' comp claim denial is going to depend upon the circumstances. There are situations in which employees have been goofing off at work and have still received benefits.  In fact, Pennsylvania is one of the states that provides the broadest protection to workers and one of the most limited horseplay defenses. Workers should never assume they will not be successful in a claim for benefits if they were goofing off, and should always have their case evaluated by a legal professional.

When Can You Get Workers' Compensation Benefits if You Were Goofing Off?

In the state of Pennsylvania, the only time an employer can successfully mount a horseplay defense to a workers' compensation claim is when the horseplay is so disconnected from the regular work duties the employee is obligated to perform that the employee is essentially considered to be a trespasser.

Different states have varying rules regarding horseplay. Safety News Alert recently reported on one case in which a worker in South Dakota sustained an injury when he was goofing off with his co-workers. Two of the employees were chasing each other around the work site and one tried to jump over a ditch. When he landed, he broke his ankle. He subsequently made a claim for workers' compensation benefits, seeking payment of his medical expenses and temporary disability benefits while unable to work due to the ankle injury. The employee handbook specifically forbade running on the job site.

The employer denied the claim and the denial was appealed. The Department of Labor indicated the injury should not be covered because it did not arise from work duties but instead arose while the employee was goofing off. However, in a subsequent appeal, the Supreme Court reversed. Applying a four-part test applicable in the state, the court found the workers had down time and thus were not deviating from their duties since they had no duties at the moment. The deviation, if any, from work duties was minimal and the horseplay was not a substantial deviation from his work tasks. As a result, he was entitled to workers' compensation benefits.

Each state has its own workers' comp laws and a test applicable in South Dakota does not affect PA workers. Still, this case is one example of many in which a worker was allegedly engaged in horseplay and was still entitled to work injury benefits. Employees should be aware they can routinely get compensated for injuries at work that occurred even when horsing around was involved as long as their behaviors were not far outside the bounds of acceptability.